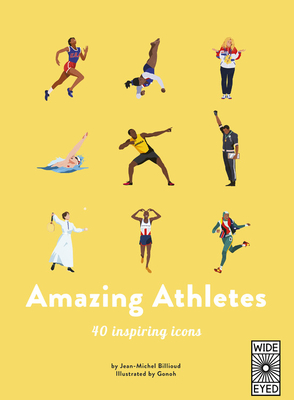 Records smashed… incredible athletic feats… Medals won... The top 40 Olympic athletes of all time are here!In this fun, fact-packed book from the 40 Inspiring Icons series, learn how these athletic stars became the best in the world.

Relive Usain Bolt’s astonishing record-breaking runs, learn about Charlotte Cooper, the first ever female Olympic champion, meet the most decorated Olympic athlete of all time, Michael Phelps, and see some of the most impressive wins in history. From Nawal El Moutawakel, the first female Muslim born on the continent of Africa to become an Olympic champion, to gymnastic prodigy Simone Biles, whose skills on the vault and the floor are admired all over the world, these are the 40 Olympic Athletes to be learned about by all:

Each spread presents a single athlete, highlighting key facts about their careers, honors, stats and legendary performances, along with a fun, illustrated depiction of them.

Every athlete is a winner in their own way, but who will you choose as your hero?

Each book in the 40 Inspiring Icons series introduces readers to a fascinating non-fiction subject through its 40 most famous people or groups. Explore these other great topics through their most interesting icons: People of Peace, Super Scientists, Soccer Stars, Music Legends, Black Music Greats and Greek Gods and Heroes.

Jean-Michel Billioud studied at the Institut Français de Presse and the Ecole des Hautes Etudes en Sciences Sociales. He has since published a hundred non-fiction books on various themes with two obsessions: explaining things as simply as possible and rescuing from oblivion what time wants to erase. He lives in France.

Gonoh is a French illustrator based in Paris. He studied illustration and worked as a graphic designer in different agencies before turning exclusively to illustration. He has worked with Decathlon, ADP, BNP Paribas, Télérama, and Brasserie La Parisienne.