Mama, Do You Love Me?: (Books about Mother's Love, Mama and Baby Forever Book) (Hardcover) 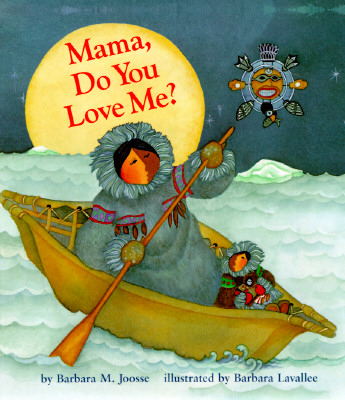 One of Susan's 5 Favorite Children's Books

Mama, do you love me? Yes I do Dear One. How much? In this universal story, a child tests the limits of independence and comfortingly learns that a parent's love is unconditional and everlasting. The story is made all the more captivating by its unusual Arctic setting. The lyrical text introduces young readers to a distinctively different culture, while at the same time showing that the special love that exists between parent and child transcends all boundaries of time and place. The story is beautifully complemented by graphically stunning illustrations that are filled with such exciting animals as whales, wolves, puffins, and sled dogs, and a carefully researched glossary provides additional information on Arctic life. This tender and reassuring book is one that both parents and children will turn to again and again.

Barbara Joosse is a full-time writer and mother. She lives with her family in a little stone house in Wisconsin. Ms. Joosse has a degree in journalism, but for the past 19 years she has devoted her time and talents to writing nearly twenty books for childr

Barbara Lavallee lives in Alaska. Her vibrant watercolor illustrations are well-known for their depictions of a wide range of Alaskan life.

--SCHOOL LIBRARY JOURNAL, Starred Review
A young girl asks how much her mother loves her, even when she is naughty, and receives warm, reassuring answers. The twist on this familiar theme is that the two are Inuits, and the text and pictures draw on their unique culture: "What if I put salmon in your parka, ermine in your mittens, and lemmings in your mukluks?" asks the girl. Two pages of back matter define and explain the functions of various terms in Inuit life past and present. Charming, vibrant watercolor illustrations expand the simple rhythmic text, adding to the characters' personalities and to the cultural information. Ceremonial masks appear in the corner of several pages and on the endpapers, a nice detail in a well-designed book.


--THE HORN BOOK MAGAZINE, November 1991
"Mama, do you love me?" Every child in the world wants a reassuring answer, including this small Inuit girl in long-ago northern Alaska. In a series of questions and answers reminiscent of Margaret Wise Brown's The Runaway Bunny(Harper), the child uses her imagination to test her mother's love. The answer is always a positive one, but the mother is also honest. " 'What if I put salmon in your parka, ermine in your mittens, and lemmings in your mukluks?' 'Then I would be angry.' 'What if I threw water at our lamp?' 'Then, Dear One, I would be very angry. But still, I would love you.'" The whale-oil lamp is pictured clearly, and its importance is explained in the two-page glossary at the end of the book: "The lamp in an Inuit home was never left untended because it was such a vital part of daily survival." The rounded, stylized watercolors are brightly appealing, full of humor and love. The small challenger stands with her hands on her hips looking way up at the tall, broad mother who has her hands on her hips; in another picture there is a huge hug which encompasses mother, girl, and doll in a mass of variously flowered dress fabric and black braids. The book is a beautiful combination of a rich culture and a universal theme.


--PUBLISHERS WEEKLY, August 1991
"Yes I do, Dear One," answers the mother whose daughter asks her the question posed in the book's title. And how long will she love her child? "I will love you until the umiak flies into the darkness, till the stars turn to fish in the sky, and the puffin howls at the moon," responds the mother soothingly, employing images familiar to the Inuit people of Northern Alaska where this Iyrical story is set. Echoing the simplicity of Joosee's verse are Lavallee's stylized illustrations, which convey the austerity of the arctic landscape while depicting the bright, intricate patterns and textures of Inuit garb. A glossary of terms used in the text is included at the end of this striking volume, which uses a timeless culture to convey a timeless message.


--PARENTS, December 1991
In a story reminiscent of the classic Ruraway Bunny, a child tests her mother's love: "What if I ran away?" she asks. "Then I would be worried," her mother answers."What if I turned into a polar bear, and I was the meanest bear you ever saw...and you cried?" says the girl. "Then I would be very surprised and very scared But still...I would love you" comes the reassuring reply. The arctic setting adds an intriguing dimension to a universal story.


This Book is a beautiful combination of a rich culture and a universal theme. The Horn Book