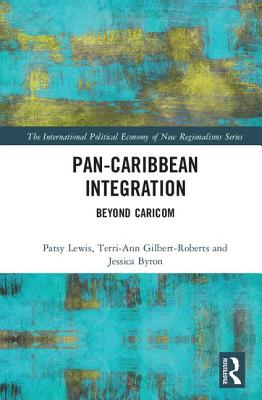 A critical part of the history of regionalism in Latin America and the Caribbean is to be found in the widening of the economic and functional relationships among the English-speaking Caribbean to embrace other countries in the Greater Caribbean.

Bringing together a range of international experts to explain the broad thrusts of CARICOM's widening project and the opportunities and challenges it presents, the book pays particular attention to CARICOM's relations with the French Caribbean territories. Providing a review of the pan-Caribbean landscape this volume notes the impact of these new relationships on internal CARICOM affairs; inter-regional/South-South cooperation; and political and legislative changes in European metropoles of the non-independent territories. It also contemplates recent developments in the region and globally, such as political instability in Brazil and Venezuela, Britain's decision to leave the European Union and the policies of the Donald Trump administration.

This edited collection will be an important resource for students and researchers in Latin American and Caribbean politics, economics, development, history and heritage.

Patsy Lewis is Professor of Regional Integration and Small States Development at the University of the West Indies, Mona, Jamaica. She is also Visiting Professor at the Watson Institute for International and Public Affairs, Brown University, USA. Her research has focused on CARICOM and the OECS as well as small states development. She is a graduate of Cambridge University (Mphil, PhD.) and the University of the West Indies, Mona, Jamaica (BA). Terri-Ann Gilbert-Roberts is a Research Fellow at the Sir Arthur Lewis Institute of Social and Economic Studies (SALISES) at the University of the West Indies (UWI), Mona, Jamaica where she chairs the SALISES 50/50 Youth Research Cluster which supports evidence-based youth policies and programmes in the Caribbean. She is the author of The Politics of Integration: Caribbean Sovereignty Revisited, Ian Randle, 2013 and Editor of Youthscapes' of Development in the Caribbean and Latin America, a 2014 Special Issue of the journal Social and Economic Studies (63:3&4). She was Commonwealth Academic Fellow at the Institute of the Americas, University College London in the 2016/2017 academic year. Jessica Byron is Professor of Caribbean International Relations and Diplomacy and Director of the Institute of the Institute of International Relations, UWI St Augustine Campus, Trinidad. She has published extensively on Caribbean-Latin American international relations and on small states and territories in the global political economy. Her latest publications include 'Summitry in the Caribbean Community: A Fundamental Feature of Regional Governance' in Summits and Regional Governance: The Americas in Comparative Perspective (Routledge) and 'Martinique's Accession to the OECS: A New Chapter in Caribbean Regionalism?' in The Round Table (106 (3)).