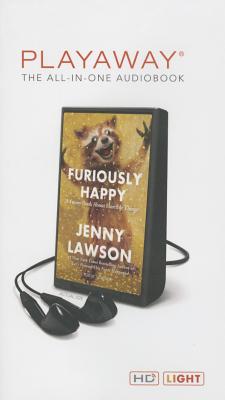 By Jenny Lawson, Jenny Lawson (Read by)
$82.49
Unavailable from Warehouse - May take longer to order

“Anyone living with depression knows that it's like being held hostage by your own brain, and sometimes survival means clinging to the knowledge that it won't last forever. Lawson takes this to the next level in Furiously Happy, her catalogue of the wonderful, ridiculous adventures that she has gone on in an effort to make the good times overshadow the bad. By fearlessly embracing her weirdness and being open about her experiences with mental illness in a culture that still largely stigmatizes and misunderstands such disorders, Lawson shines a light on what it's like to live with depression, OCD, insomnia, and anxiety. More than that, though, she shows that it is possible to fight back - even if it sometimes requires holding a midnight raccoon rodeo.”
— Marita Rivir (M), Joseph-Beth Booksellers, Cincinnati, OH