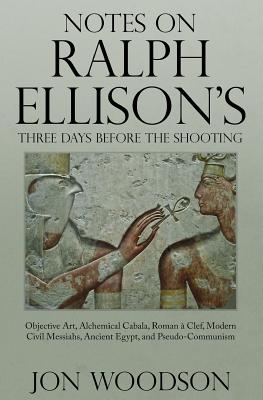 Everyone knows who MLK was. Hardly anyone knows that MLK was the creation of the breakaway American followers of the modern mystic G.I. Gurdjieff. Led by A.R. Orage, a large group of highly accomplished Americans intervened in history by creating a modern civil messiah. To do this they followed a plan laid down four thousand years ago by the priests of Horus and two thousand years ago by the Essene community. Orage's group of self-appointed spiritual supermen began in the early 1930s, and twice they failed. The third time they changed their strategy and the result was the charismatic civil rights activist, MLK. Ralph Ellison's unpublished second novel Three Days Before the Shooting hides an account of this daring scheme beneath layers of ciphers, myth, and literary dazzle. Concealed within the American Communist Party and other groups, a cadre of writers, intellectuals, editors, lawyers, artists, and publishers staged an Objective Drama that made MLK a towering moral leader. Only in the disordered pages of Ellison's esoteric, experimental novel is there a full account of this monumental project. Building on a decades-long course of research beginning with an audacious dissertation on Melvin B. Tolson, Jon Woodson has revealed the contents of Ellison's fascinating and profound work of genius. Jon Woodson's investigation of Ralph Ellison's second novel marks an important departure from the former approaches to Ellison's fiction. Previous scholarship on Ellison was grounded in either Ellison's own comments or derived from speculations that disguised their provisional nature through jargon, volume, and theory. Woodson argues that Ellison's surface text is always deceptive, so using Ellison's essays and notes to explicate his fiction is fruitless. Woodson has produced a reading of Three Days Before the Shooting that accounts for everything in the text by turning in each case to the texts that Ellison consulted in the writing of his novel. Woodson shows how Ellison invented new modes of encryption that surpassed those devices used in such indecipherable texts as Djuna Barnes's, Nightwood, William Faulkner's Pylon, and Mina Loy's Insel-novels with a deep kinship to Ellison's Three Days. Woodson's six notes address the materials at the core of Ellison's novel: Objective Art, Alchemical Cabala, Roman Clef, Modern Civil Messiahs, Ancient Egypt, and Pseudo-Communism. Woodson provides the name of a real person for every character in Three Days Before the Shooting. This is all the more astonishing against the fact that no other scholar has discussed the novel as a one-for-one roman clef. Jon Woodson's insights establish an entirely new understanding not only of Three Days Before the Shooting but for the complete Ellison oeuvre. Reviews of previous books: "Jon Woodson's Anthems, Sonnets, and Chants is a thoroughly engaging work. This is a major work of scholarship which genuinely breaks new ground in the field." -James A. Miller, professor of English and American studies, The George Washington University. Woodson has proven to be a scholar of immense originality in his choice of methods, topics and analyses. His dedication to mining and interpreting evidence is never in doubt, nor is his willingness to resist what he views as conventional academic readings. He is a 'critic's critic', who boldly follows paths of inquiry leading to fresh understandings. Lauri Ramey, Professor of English, California State University, Los Angeles. Review of Anthems] Wasafiri, 2015.