Flatland: A Romance Of Many Dimensions (Paperback) 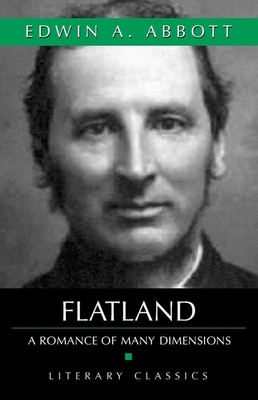 This highly original and entertaining short novel (which has been in print continually since its original publication in 1884) tells the story of A. Square, an inhabitant of the two-dimensional world Flatland. After an overview of Flatland society in all its aspects, A. Square recounts how he was led on a series of visions and travels to Pointland, Lineland, and Spaceland by A. Sphere on the last day of Flatland’s year 1999. Through his encounters with these other lands, A. Square realizes that there is indeed more to the universe than the world he lives in. A. Sphere opens A. Square’s mind to new possibilities, illuminating the path to knowledge through careful observation and commonsense experimentation. But when A. Square can be contented no longer with what he has already seen, he dreams of visiting a land of four dimensions, the so-called Thoughtland. As in real life, such desires are met with sometimes-violent opposition from society’s leaders in the name of maintaining the status quo.

Victorian clergyman and Shakespearean scholar Edwin Abbott penned this mathematical allegory about the dawn of reason seemingly in response to the puritanical environment of his era. Touching on themes of humanity’s insatiable quest for truth, authority’s tendency to squash radical ideas born from this quest, and the necessity of curiosity, Flatland is an odd and charming little book whose impact far surpasses its concise prose.

Edwin A. Abbott was born in London on December 20, 1838,  the  son  of  the  headmaster  of  the  Philological School  in  Marylebone.  Educated  at  the  City  of  London School and at St. John’s College in Cambridge, he received highest  honors  in  the  classics,  mathematics,  and  theology. After graduation Abbott married and became a minister. In addition  to  holding  positions  at  King  Edward’s  School  in Birmingham  and  at  Clifton  College  in  Bristol,  he became headmaster of the City of London School in 1865—a position he held for twenty-five years. He was considered one of  the greatest teachers of his era.