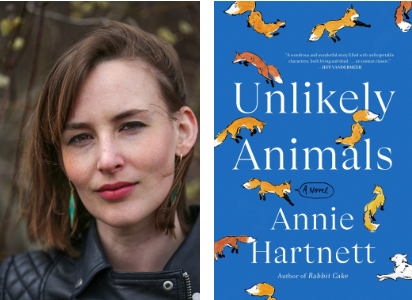 Join us on Saturday, May 14th at 6:30 p.m. for a reading and discussion with Annie Hartnett, author of Unlikely Animals.

"I absolutely loved Annie Hartnet's debut novel Rabbit Cake, and Unlikely Animals did not disappoint, it's positively delightful! Emma Starling is summoned home to Everton, New Hampshire to cure her dying father. But, she hasn’t told anyone that she lost her ability to heal, and subsequently dropped out of medical school...a Greek chorus of dead townspeople from the Maple Street Cemetery offer commentary throughout. With charming characters and a complex plot, Unlikely Animals is wickedly funny, stellar storytelling."--Reviewed by Susan, Books on the Square

A lost young woman returns to small-town New Hampshire under the strangest of circumstances in this one-of-a-kind novel of life, death, and whatever comes after from the acclaimed author of Rabbit Cake.

Natural-born healer Emma Starling once had big plans for her life, but she’s lost her way. A medical school dropout, she’s come back to small-town Everton, New Hampshire, to care for her father, who is dying from a mysterious brain disease. Clive Starling has been hallucinating small animals, as well as having visions of the ghost of a long-dead naturalist, Ernest Harold Baynes, once known for letting wild animals live in his house. This ghost has been giving Clive some ideas on how to spend his final days.

Emma arrives home knowing she must face her dad’s illness, her mom’s judgment, and her younger brother’s recent stint in rehab, but she’s unprepared to find that her former best friend from high school is missing, with no one bothering to look for her. The police say they don’t spend much time looking for drug addicts. Emma’s dad is the only one convinced the young woman might still be alive, and Emma is hopeful he could be right. Someone should look for her, at least. Emma isn’t really trying to be a hero, but somehow she and her father bring about just the kind of miracle the town needs.

Set against the backdrop of a small town in the throes of a very real opioid crisis, Unlikely Animals is a tragicomic novel about familial expectations, imperfect friendships, and the possibility of resurrecting that which had been thought irrevocably lost.

Annie Hartnett is the author of Rabbit Cake, which was listed as one of Kirkus Reviews’s Best Books of 2017 and a finalist for the New England Book Award. She has received fellowships from the MacDowell Colony, Sewanee Writers’ Conference, and the Associates of the Boston Public Library. She studied philosophy at Hamilton College, has an MA from Middlebury College, and an MFA from the University of Alabama. When she began writing Unlikely Animals, she was living in the groundskeeper’s house in a cemetery. She now lives in a small town in Massachusetts with her husband, daughter, and darling border collie, Mr. Willie Nelson.