All events have been canceled until further notice.  Please check back for rescheduled/new events. 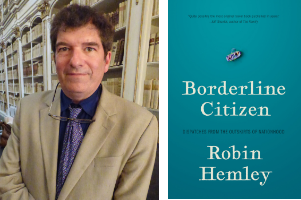 Borderline Citizen: Dispatches from the Outskirts of Nationhood
by Robin Hemley

"Quite possibly the most original travel book published in years."—Jeff Sharlet, author of This Brilliant Darkness and The Family.

“Robin Hemley explodes the very idea of nationhood... Brilliantly comic, darkly but poignantly introspective, Borderline Citizen should be required reading for the 21st century and beyond.” – Xu Xi, Author of This Fish is Fowl

“In vividly rendered essays, Hemley takes us to some of history's oddest bits of territory, showing how human lives are shaped (and often distorted) by arbitrary political boundaries. With superb storytelling, he explores the meanings of nationalism, sovereignty, citizenship and the loyalties of the human heart." – Corey Flintoff, Former NPR International Correspondent
In Borderline Citizen, Robin Hemley wrestles with what it means to be a citizen of the world, taking readers on a singular journey through the hinterlands of national identity.
Forgoing the exotic descriptions of faraway lands common in traditional travel writing, Borderline Citizen upends the genre with darkly humorous and deeply compassionate glimpses into the lives of exiles, nationalists, refugees, and others. Hemley’s superbly rendered narratives detail these individuals, including a Chinese billionaire who could live anywhere but has chosen to situate his ornate mansion in the middle of his impoverished ancestral village, a black nationalist wanted on thirty-two outstanding FBI warrants exiled in Cuba, and an Afghan refugee whose intentionally altered birth date makes him more easy to deport despite his harrowing past. Part travelogue, part memoir, part reportage, Borderline Citizen redefines notions of nationhood through an exploration of the arbitrariness of boundaries and what it means to belong.

Robin Hemley is the author of 12 books of nonfiction and fiction, and is the Founder of NonfictioNOW, the world’s leading international conference in nonfiction. A graduate of the Iowa Writers Workshop, he returned to Iowa for nine years, to direct the Nonfiction Writing Program. Among his numerous awards for his writing, he’s been awarded fellowships from the Guggenheim Foundation, The Rockefeller Foundation, and three Pushcart Prizes in both fiction and nonfiction. His work has been published in the U.S. Great Britain, Canada, Australia, Japan, Germany, the Philippines, Singapore, Iceland, and elsewhere...He’s not entirely sure anymore where he lives, but he’s still somewhere on the planet.