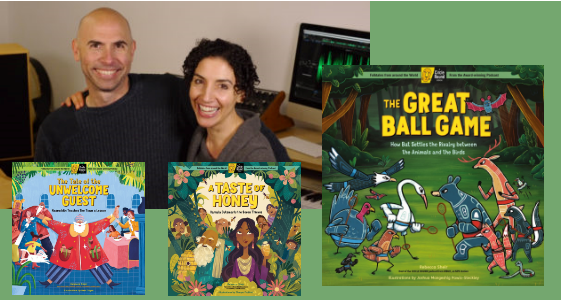 The Great Ball Game: How Bat Settles the Rivalry Between the Animals and the Birds by Rebecca Sheir

A classic folktale with roots in the traditional stories of many Indigenous peoples in North America, The Great Ball Game is adapted for today's kids by Rebecca Sheir, host of the award-winning Circle Round podcast. The stunning art of Joshua Mangeshig Pawis-Steckley, an Ojibwe woodland artist, along with creative activities, make this an engaging picture book that also fosters storytelling and promotes the values of diversity, acceptance, and understanding of others.

The Great Ball Game, a classic folktale originating from the Cherokee, Creek, Ojibway and Menominee people of North America, is adapted for a contemporary audience by Rebecca Sheir, host of the award-winning Circle Round podcast, and accompanied by the vibrant illustrations of Joshua Mangeshig Pawis-Steckley, an Ojibwe Woodland artist. A dispute between the animals and the birds over who is best leads to a ball game challenge. When the game is disrupted by the arrival of a tiny creature named Bat, who doesn't seem to fit on either team, all the participants learn the value of diversity and celebrating those who seem "different." The accompanying activities and prompts encourage children to develop their own storytelling skills.

Created and produced by parents of young children, WBUR's Circle Round podcast  adapts folktales from around the world into sound- and music-rich radio plays for kids ages 3 to 103. Each episode explores universal themes like friendship, persistence, creativity and generosity, and ends with an activity that inspires a deeper conversation between children and grown-ups.

Beloved voices from the stage, screen and podcast/public-radio worlds bring these stories to life with the help of narrator, writer, and veteran public radio host/reporter Rebecca Sheir.  Eric Shimelonis, composer for the stage and screen, creates original music for each story.

Circle Round has earned numerous honors, including a Parents' Choice Gold Award, a Webby nomination, and featured spots at the The UK International Radio Drama Festival and HEAR Now Festival. Circle Round was also the recipient of a major grant from the Henry Luce Foundation.

Rebecca Sheir has brought thousands of stories to life as a public radio reporter and host, appearing on such shows as Morning Edition, All Things Considered, Here & Now, The Splendid Table and Marketplace. She's hosted several weekly news programs, including AK (Alaska Public Radio Network) and Metro Connection (WAMU 88.5), along with podcasts for the Folger Shakespeare Library and Slate Magazine. Rebecca holds an MFA in Creative Nonfiction from the University of Iowa. Her first book, Onions and Garlic, was adapted from a Circle Round episode and published by PJ Library. She's also the author of the Circle Round picture books series, published by Storey Publishing.

Eric Shimelonis is a composer, musician and audio producer whose work has been heard on stage, screen and over the airwaves. Audiences have enjoyed his classical compositions at the Juilliard School, the Rattlestick New Music Series, the Kennedy Center and at a sold-out concert at Carnegie Hall. With more than 300 sound designs in the theater, Eric has won a Helen Hayes Award, and has been nominated for Drama Desk, Lucille Lortel, Big Easy and Henry Hewes Design Awards. Film highlights include the features International Falls and Winter Passing, for which he performed a duet with Will Ferrell.

The Great Ball Game: How Bat Settles the Rivalry between the Animals and the Birds; A Circle Round Book (Hardcover)

A Taste of Honey: Kamala Outsmarts the Seven Thieves; A Circle Round Book (Hardcover)

The Tale of the Unwelcome Guest: Nasruddin Teaches the Town a Lesson; A Circle Round Book (Hardcover)