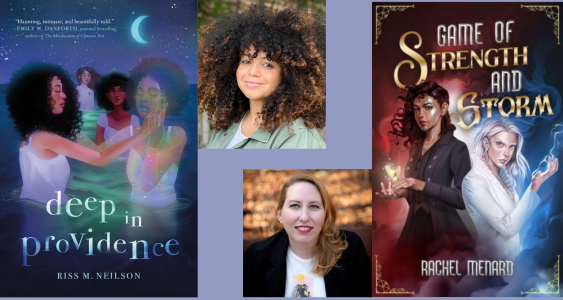 Join us on Saturday, June 11th at 2:00 p.m.  for two local authors.  Riss Neilson's, author of the debut young adult novel, Deep in Providence, in conversation with Rachel Menard, author of Game of Strength and Storm.

"A powerful story about three teenagers and their mission to raise their friend from the dead. Not only is this book witchy and spooky, you get to feel for the characters’ real world problems and their passions. The familial, romantic and platonic bonds between these characters are beautiful to experience. This book has a little something for everyone. Plus it's set in Providence and is a local author’s debut novel!"--Reviewed by Vanessa, Books on the Square

The Hazel Wood meets the nuanced realism of Erika L. Sanchez in this spellbinding YA grounded fantasy debut about three best friends who turn to magic when they're haunted by a friend's death...and perhaps her spirit.
Miliani, Inez, Natalie, and Jasmine grew up together in the south side of Providence, Rhode Island. The best friends have supported each other through the deportation of Inez's father, Natalie's mother's drug addiction, and the death of Miliani's beloved Papa, who taught them everything they know about magic.

Then Jasmine is killed by a drunk driver, leaving the girls haunted by grief...and Jasmine's lingering spirit. Determined to bring Jasmine back, the surviving friends band together, testing the limits of their magic and everything they know about life, death, and each other.

Suspenseful and absorbing, Deep in Providence is a story of profound yearning, and what happens when three teen girls are finally given the power to go after what they want.

Game of Strength and Storm by Rachel Menard

Teenagers of Olympia Gen and Castor race to be the first to complete six nearly impossible challenges to obtain their greatest desire. Only one will win. The other walks away with nothing—if she walks away at all.
Victory is the only option.

Once a year, the Olympian Empresses grant the wishes of ten people selected by a lottery—for a price. Seventeen-year-old Gen, a former circus performer, wants the freedom of her father, who was sentenced to life in prison for murders she knows he didn’t commit. Castor plans to carry the island Arcadia into the future in place of her brother, Pollux, but only after the Empresses force a change in her island’s archaic laws that require a male heir.

To get what they want, Gen and Castor must race to complete the better half of ten nearly impossible labors. They have to catch the fastest ship in the sea, slay the immortal Hydra, defeat a gangster called the Boar, and capture the flesh-eating Mares, among other deadly tasks.

Gen has her magic, her ability to speak to animals, her inhuman strength—and the help of Pollux, who’s been secretly pining for her for years. But Castor has her own gifts: the power of the storms, along with endless coin. Only one can win. The other walks away with nothing—if she walks away at all.

Rachel Menard was born in New Jersey, raised in Arizona, and then relocated to Rhode Island. Throughout her life she has been a barista, college radio DJ, singer in an alt-country band, marketer, designer, and finally, a writer. Her short fiction has been featured on Cast of Wonders and her editorial work has been seen in Writer's Digest.

Game of Strength and Storm (Paperback)