We are here for limited in-store browsing and contactless parking lot pickup.  Order online any time. 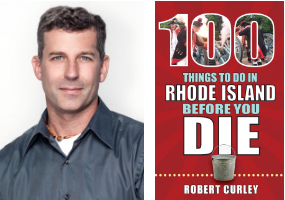 Bob Curley has proudly called Rhode Island home for over twenty years. In his new book 100 Things to Do in Rhode Island Before You Die, set to be released on September 1st, he confesses the reasons he fell in love with the rich history and quirky character of his adopted home.

From sunrise in the shadow of the Beavertail lighthouse to sunset on the deck of the Coast Guard House, 100 Things to Do in Rhode Island Before You Die will fill your days with experiences of a lifetime in the Ocean State. Fuel up for adventure with only in Rhode Island treats like Del s lemonade, coffee cabinets, and New York System Wieners, then set course for a 12-meter yacht sail on Narragansett Bay, a day trip to Block Island to collect glass orbs and scale the Mohegan Bluffs, and a walk on the wild side of historic Newport s Cliff Walk. You ll meet polo ponies, harbor seals, and some leafy green animals by day, and fill your nights with the sounds of live music at the Ocean Mist beach bar and the Rhythm and Roots festival and take in the sights (and smells) of Providence s Waterfire. Author Robert Curley has always lived within hailing distance of the sea, moving from his native Long Island to Rhode Island more than two decades ago and quickly falling in love with the quirky character and rich history of his adopted home. His carefully curated attractions and itineraries are your personal Rhode Trip for creating big memories in the littlest state.

Robert Curley is a freelance travel writer and guidebook author who has written extensively about his current home state of Rhode Island. His work has appeared in hundreds of print and online publications, including Rhode Island Monthly, Providence Monthly, Newport Life, Coastal Living, AFAR, USA Today, and Four Seasons magazine. When he’s not off exploring, he lives in a lakeside cottage with his wife, dog, cat, and several very large raccoons.