Meet the Author - Sandra A. Miller 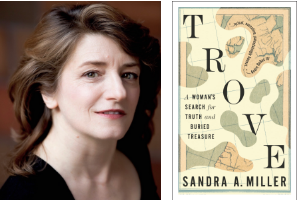 Trove: A Woman's Search for Truth and Buried Treasure
by Sandra A. Miller

"Sandra Miller writes about marriage, parenting, aging parents, and the quest for creative fulfillment with...an honesty that is as shocking as it is satisfying. I was laughing through my tears and secretly wishing the author was my best friend.” —Lisa Carey, The Stolen Child

Trove is the story of a woman whose life is up-ended when she begins an armchair treasure hunt—a search for $10,000 worth of gold coins buried in New York City, of all places—with a man who, as she points out, is not her husband. In this eloquent, hilarious, sharply realized memoir, Sandra A. Miller grapples with the regret and confusion that so often accompanies middle age, and the shame of craving something more when she has so much already. In a very real way, Miller has spent her life hunting for buried treasure. As a child, she trained herself to find things: dropped hair clips, shiny bits of broken glass, discarded lighters. Looking to escape from her volatile parents and often-unhappy childhood, Miller found deeper meaning, and a good deal of hope, in each of these objects. Now an adult and facing the loss of her last living parent—her mother who is at once cold, difficult, and wildly funny—Miller finds herself, as she so often did as a little girl, pressed against a wall of her own longing. Her search for gold, which soon becomes an obsession, forces her to dredge up painful pieces of her past, confront the true source of her sorrow, and finally discover what it is she has been looking for all these years.

Sandra A. Miller's writing has appeared in over one-hundred publications, including National Public Radio, The Christian Science Monitor, Spirituality & Health, Yankee, FamilyFun, and The Boston Globe, for which she is a regular correspondent. One of her essays was turned into a short film called "Wait," directed by Trudie Styler and starring Kerry Washington. She teaches writing at the University of Massachusetts, Lowell and lives in Arlington, Massachusetts with her husband and two children.

Trove: A Woman's Search for Truth and Buried Treasure (Paperback)