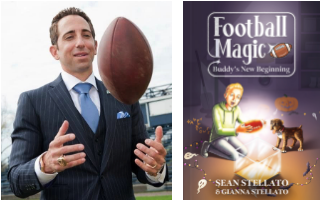 “Throughout my career in sports, I’ve had many magical moments. Reading Football Magic: Buddy’s New Beginning reminded me of the days I spent playing youth football, learning the importance of teamwork, and the true magic of football.”--Doug Flutie, 1984 Heisman Trophy Winner & former NFL QB

This was supposed to be the last time Buddy would have to move for a while.  At least, that's what his dad had promised when they first arrived in Salem, Massachusetts, a town still deeply rooting in its bewitching history.  Buddy doesn't ask for much: become the starting QB, make friends, always try my hardest, dream big, repeat.  He hopes that maybe he can help the school's team make it to the league championships.  But when he discovers an old football and a mysterious spell book, things in Salem get downright magical.  Being the new kid isn't easy, but will Buddy finally learn what it means to belong to a team?

NFL sports agent Sean Stellato has never backed down from a challenge. Once told “skinny kids don’t make it in a sports full of giants,” he defied the naysayers to become a star quarterback at Salem High School during a tumultuous time in the town’s history. After standing on the sidelines as a sophomore and watching his beloved team suffer a crushing defeat, he bravely told revered coach Ken Perrone that if he believed in him and started him as quarterback the next season, he’d lead the Salem Witches to the Super Bowl. He did, despite the perfect storm of political, legal, and personal turmoil that surrounded his team when a contentious teacher’s strike almost put an end to Salem’s legendary season. Sean Stellato is the founder of Stellato Sports, a mulit-faceted sports representation and marketing agency. Sean is an NFLPA certified agent who represents numerous NFL players.  In addition to representing players at the negotiating table, Sean runs skills camps, training and conditioning coaching, as well as player events and promos.