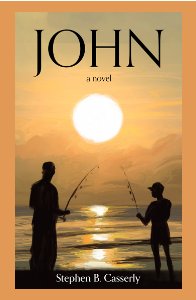 Join us on Thursday, March 9th at 6:00 p.m. for a reading and discussion with Stephen Casserly, author of John: A Novel.

John: A Novel by Stephen Casserly

“Take your pick of adjectives: gritty, sentimental, unflinching - the truth is that after reading this gut-punch of a debut novel, you will never look at the homeless in the same way again.”–Stephen Donovan, Bookseller, Comic, and Emmy-nominated host

While living in the woods and struggling with daily life, a homeless man and a teenaged ward of the state named John form a powerful and life-changing bond. The story’s blend of wisdom, bravery, compassion, and struggle creates a compelling world that is emotionally true testimony to the resilience of the human spirit and the importance of relationships.

When a tragic event reveals the fragility of their ties, the man and the boy find themselves face-to-face with realities neither one of them could have imagined.Walking across this life-or death tightrope together tests their commitment to each other and ultimately to life itself.

John: A Novel is a poignant confrontation with the realities of trauma, addiction, and the redeeming power of love that invites the reader to witness the depth of the human heart as it reveals itself in ever-surprising, ever-mysterious, and ever-glorious ways.

Stephen Casserly is a life-long resident of Rhode Island. He is a graduate of Bryant College. He retired in 2022 from being a project manager and plant acquisition specialist at a landscape firm to write full time. He has been in recovery since 1981. He is working on a second novel set in Ireland in 1860. He lives in Warwick RI, with his wife Maya Breuer.