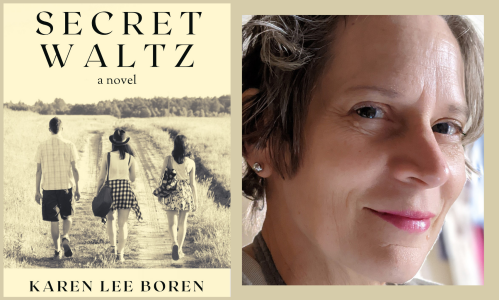 In the literary tradition of Barbara Kingslover, Maggie O'Farrell, and Jane Hamilton comes a new novel by Karen Lee Boren, the author of Mother Tongue and Girls in Peril.

In the mid-1960s, sex is dangerous. Having sex can ruin your family, ruin your future, or worse. Secret Waltz follows the coming-of-age journeys of three teens whose lives are turned upside down by the secrets they keep.

Four best friends, Will, Kirstin, Leo, and Emelia, are growing up together, finding themselves and what it means to be a budding adult. They do all the things teens do—hang out at the pool, bike everywhere, and discover their bodies.

But this growing up thing is hard. On her 16th birthday Emelia receives stunning news from her aunts who raised her. Seems they’ve been keeping a secret from her for her entire life, one that forces Emelia to re-evaluate everything she thought she know about her family and herself, sending her on a journey of discovery with few tools and no idea what she might find along the way.

Meanwhile, Leo is struggling with his abusive father, who leads a polka band, drinks too much, and cheats on Leo’s mother. Leo plays the guitar. He’s good, too. But his father wants Leo to stay away from that so-called music of rock and roll. Their relationship is complex: Leo both looks up to and hates his father for the control he has over his music and his life.

All that is hard enough, but then Leo and Emelia and their friends Will and Kirstin stumble across Sonya, someone they’ve seen at school but don’t really know, doing what to them is an inexplicable and horrifying act. What should they do? What can they do? This begins a chain of actions that escalate and spiral out of their control.

In the end, Secret Waltz asks, what does it mean to be a “good girl” or a “good boy”? If you have a secret, do you get to still be “good”?

Karen Lee Boren writes fiction and nonfiction. Her novel, Girls in Peril, was the premier publication for the Tin House New Voices series and a Barnes and Noble Discover selection. Her novel, Month of Fire, was a finalist for the New American Press book contest, and her story collection, Mother Tongue was published by New Rivers Press in 2015.  She has been nominated for a Pushcart Prize and is the winner of the 2018 Wundor Editions Fiction Prize. She's earned a Ph.D from the University of Wisconsin and an MFA from Wichita State University. A native of Milwaukee, she now lives with her husband, Paul, in Providence, RI. She is a full professor of English and creative writing at Rhode Island College.