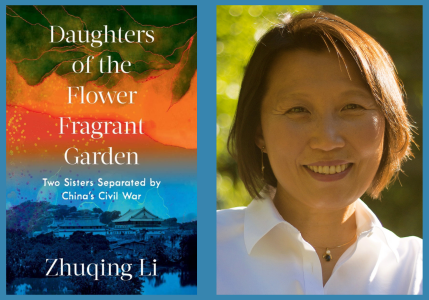 Join us on Tuesday, June 21st at 6:30 p.m.  for a reading and discussion with Zhuqing Li, author of Daughters of the Flower Fragrant Garden.

Sisters separated by war forge new identities as they are forced to choose between family, nation, and their own independence.

Jun and Hong were scions of a once great southern Chinese family. Each other’s best friend, they grew up in the 1930s during the final days of Old China before the tumult of the twentieth century brought political revolution, violence, and a fractured national identity. By a quirk of timing, at the end of the Chinese Civil War, Jun ended up on an island under Nationalist control, and then settled in Taiwan, married a Nationalist general, and lived among fellow exiles at odds with everything the new Communist regime stood for on the mainland. Hong found herself an ocean away on the mainland, forced to publicly disavow both her own family background and her sister’s decision to abandon the party. A doctor by training, to overcome the suspicion created by her family circumstances, Hong endured two waves of “re-education” and internal exile, forced to work in some of the most desperately poor, remote areas of the country.

Ambitious, determined, and resourceful, both women faced morally fraught decisions as they forged careers and families in the midst of political and social upheaval. Jun established one of U.S.-allied Taiwan’s most important trading companies. Hong became one of the most celebrated doctors in China, appearing on national media and honored for her dedication to medicine. Niece to both sisters, linguist and East Asian scholar Zhuqing Li tells her aunts’ story for the first time, honoring her family’s history with sympathy and grace. Daughters of the Flower Fragrant Garden is a window into the lives of women in twentieth-century China, a time of traumatic change and unparalleled resilience. In this riveting and deeply personal account, Li confronts the bitter political rivals of mainland China and Taiwan with elegance and unique insight, while celebrating her aunts’ remarkable legacies.

Zhuqing Li is a professor of East Asian Studies at Brown University and the author of four scholarly books on Chinese linguistics. She lives in Providence, Rhode Island.