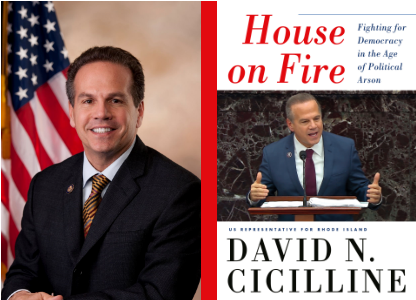 Join us on Friday, October 14th at 7:00 p.m.  for a reading and discussion with U.S. House of Representative David Cicilline, author of House on Fire: Fighting for Democracy in the Age of Political Arson.

House on Fire: Fighting for Democracy in the Age of Political Arson by Represntative David Cicilline

"The country got to know David Cicilline as a fiery manager in the second impeachment of Donald Trump, but he has long helped lead the effort to make democracy deliver for Americans. In House on Fire, he sounds an alarm about our system's very survival. We ignore him at our peril."—Jennifer Palmieri, former communications director of the Obama White House and co-host of Showtime's "The Circus"

The rioters were still in the Capitol, shattering the door to the House Chamber and bellowing “Hang Mike Pence,” when David Cicilline, safely locked inside his office, began writing the articles of impeachment that would lead to Donald Trump’s second Senate trial. He helped prosecute the case, earning admiration from his fellow progressives and a national following. But by summer he would be calling out some of those same colleagues for caving to special interests and attempting to block his plan to rein in the Big Tech companies like Facebook and Google.

Beyond sounding an alarm, House on Fire: Fighting for Democracy in the Age of Political Arson identifies the key threat to our democracy—that the GOP has become a Trumpist authoritarian cult—and outlines how we fight back. A response that must include both citizen opposition and practical reforms, including an end to the Senate filibuster, discarding the Electoral College, expanding the Supreme Court, and requiring that justices adhere to a code of ethics.

Cicilline actually believes in politics and the system. He used them both to deliver for the people in a once-corrupt city he ran as mayor and in Washington, where he has risen to help lead the Democratic Party in Congress. In House on Fire, Cicilline spares no one from criticism as he argues for a politics that produces results and warns that without it Trump, or someone worse, will take power in 2024 and make us wish for the days when the only thing we complained about was gridlock.

David N. Cicilline serves Rhode Island’s First Congressional District in the U.S. House of Representatives. Cicilline is a leader in Congress on issues of core American values, serving as Chairman of the House Antitrust Subcommittee, Chair of the Congressional LGBTQ+ Equality Caucus, and Vice Chair of the Congressional Progressive Caucus. Prior to his election to Congress, Cicilline served two terms as Mayor of Providence where he rooted out the corruption of his notorious—and imprisoned—predecessor Buddy Cianci. He is a graduate of Brown University and the Georgetown University Law Center and resides today in Providence.

House on Fire: Fighting for Democracy in the Age of Political Arson (Hardcover)