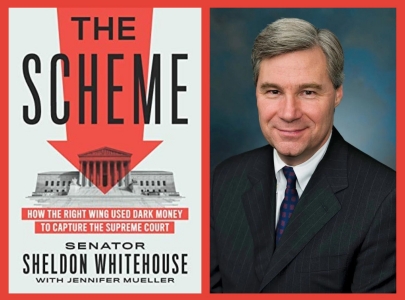 Join us on Friday, November 18th at 7:00 p.m. for a reading and discussion with Senator Sheldon Whitehouse, author of The Scheme.

The Scheme: How the Right Wing Used Dark Money to Capture the Supreme Court by Senator Sheldon Whitehouse

“A harrowing account of how right-wing billionaires and business interests have worked to capture the American judiciary—all the way up to the Supreme Court—to create an American plutocracy. Anyone who cares about the future of American democracy—indeed, the future of America, write large—needs to read this book.”—Naomi Oreskes, professor of the history of science, Harvard University, and author of Merchants of Doubt

A senior member of the Senate Judiciary Committee recounts how anonymous donors seized control of the U.S. Judiciary, including the Supreme Court

Following his book Captured on corporate capture of regulatory and government agencies, and his years of experience as a prosecutor, Senator Sheldon Whitehouse here turns his attention to the right-wing scheme to capture the courts, and how it influenced the Trump administration’s appointment of over 230 “business-friendly” judges, including the last three justices of the United States Supreme Court.

Whitehouse traces the motive to control the court system back to Lewis Powell’s notorious memo, which gave a road map for corporate influence to target the judiciary, and chronicles a hidden-money campaign using an armada of front groups and helped by the infamous Citizens United Supreme Court decision. The scheme utilized the Federalist Society as an appointments turnstile, spent secret millions to support the nominees, orchestrated an “amicus brief” signaling apparatus, and propped up front-group litigants to “fast-lane” strategic test cases to the friendly justices.

Whitehouse finds the same small handful of right-wing billionaires and corporations running operations that he likens to “covert ops,” ultimately enticing the Senate to break rules, norms, and precedents to confirm wildly inappropriate nominees who would advance the anti- government agenda of a small number of corporate oligarchs.

The world got a glimpse of this story when the Senator’s presentation at the Amy Coney Barrett hearing went viral. Now, full of unique insights and inside stories, The Scheme pulls back the curtain on a powerful and hidden apparatus that has spent years trying to corrupt our politics, control our courts, and degrade our democracy.

Sheldon Whitehouse represents Rhode Island in the U.S. Senate. He has served as his state's United States Attorney and as the state Attorney General, as well as its top business regulator. The author of Captured and The Scheme (both from The New Press), he lives in Newport, Rhode Island.

Jennifer Mueller is a writer based in Washington, DC. She has worked on issues related to campaign finance and political participation as an attorney, academic, and consultant for more than twenty years.

The Scheme: How the Right Wing Used Dark Money to Capture the Supreme Court (Hardcover)