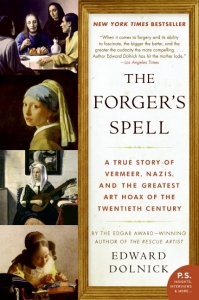 The Forger's Spell
by Edward Dolnick

“Dolnick...tells his story engagingly and with a light touch. He has a novelist’s talent for characterization, and he raises fascinating questions.” —New York Times Book Review

As riveting as a World War II thriller, The Forger’s Spell is the true story of Johannes Vermeer and the small-time Dutch painter who dared to impersonate him centuries later. For seven years a no-account painter named Han van Meegeren managed to pass off his paintings as those of one of the most beloved and admired artists who ever lived. As Edward Dolnick reveals, his true genius lay in psychological manipulation, and he came within inches of fooling the world. Instead, he landed in an Amsterdam court on trial for his life. The Forger’s Spell is the gripping, true tale of this almost perfect crime.

Edward Dolnick is the author of Down the Great Unknown and the Edgar Award–winning The Rescue Artist. A former chief science writer at the Boston Globe, he has written for the Atlantic Monthly, the New York Times Magazine, and many other publications. He lives with his wife near Washington, D.C.

The Rhode Island Hadassah book club meets the first Monday of every month, except for holidays, religious and national. Our first meeting of the year, in January, is devoted to voting on our choices of books for the rest of the calendar year. We usually read books of Jewish interest, but read a book each year that is non-Jewish, and of interest.

Marilyn Kagan is the coordinator.  Contact her at busybeaderkagan@aol.com

The Forger's Spell: A True Story of Vermeer, Nazis, and the Greatest Art Hoax of the Twentieth Century (Paperback)